Business Leaders of Tomorrow – ME3D and the printing revolution 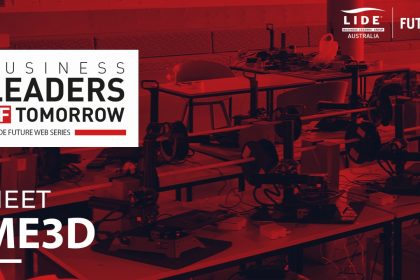 Bouncing ideas about the greatest next thing in 3d printing would be the starting point for ME3D (pronounced ‘me three d’). Matthew Connelly, ME3D’s co-founder, printed his first 3d item back in 2001. For him, coming up with something extremely elaborate that was printed just a couple of days after its conception is absolutely wonderful.

Established in Wollongong, Matt and other co-founders joined an accelerator program by the University of Wollongong to better structure the business prior to raising money and scaling up. They wanted to make sure that all the 3d printing benefits wouldn’t go through such a slow adoption process like personal computing did.

ME3D focus their work on children and education; the entry barrier for this target is really low because kids have the imagination to develop a product, a fix or a widget that is needed and that adults don’t realise just yet that they need. That’s why for them it’s so important to engage young people from an early stage on the benefits and how easy it is to 3d print.

On the coronavirus pandemic and how it impacted the business, ME3D had their share of difficulties; they had plans in place for a big launch and a new distributor, but had to adapt really quickly to a home office scenario. The grants and incentives the Australian Government announced in the early stages of lockdown have also helped them tremendously, especially making sure all jobs were safe.

For them, the pandemic also brought a gold opportunity: using their knowledge to 3d print protective equipment. In a matter of days they were able to have prototypes, approval and an initial production of 1,000 units delivered to hospitals. They were able to deliver that after finding as many printers they could and after buying over 2 tons of material to print it all up.

Other than finding prints and material, ME3D was able to quickly respond to this opportunity because they already had the software to design and 3d print items; all they had to do was to add specific modules to the technology.

About the future, ME3D is working with more suppliers to keep investing on medical equipment production. Apart from the promising medical developments, they are also working on a marketplace to facilitate how people will be able to print a design or an item they took a picture of in their living room or in their kitchen, eliminating the need of a third party to produce. On the other end, designers will also be able to better control how many people are purchasing their creations.

If in 2012 people wanted 3d printing to change the world, then in 2020 they can see that it did. It has forever changed logistics and local manufacturing, reaching a point of no return.

We would like to thank Matt and the team at ME3D for their time and for sharing their story and experience with us.

We are also on LinkedIn: https://www.linkedin.com/company/lide…