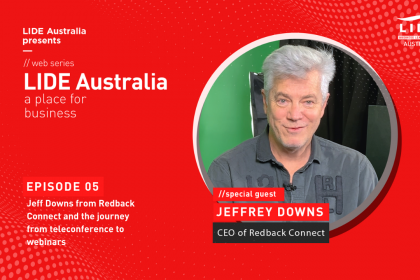 Jeff Downs, Redback Connect’s CEO, started as an entrepreneur because, in his own words, he just couldn’t stand being told what to do. From owning a small chain of grocery stores to working with sales and becoming an entrepreneur, he learned fairly quickly that business is more about the experience than the product itself.

Nowadays Redback Connect is a facilitator in the way organisations connect, communicate and collaborate. They offer solutions for digital events, such as webinars and lives, and one touch teleconferencing. Especially in the past few months, when the world was hit with the covid-19 outbreak and lockdown preventive measures, companies like Redback have helped so many others to stay connected.

However, Jeff’s journey in the digital industry started long ago and in the middle of another global scale crisis: he considers the September 11th, 2001 as his first day in business. Even though it is also the day the world witnessed one of the worst terrorist attacks ever registered, he noticed that for the first time ever he had no customers. So how could he sell anything without people thinking he was taking advantage or being insensitive to the tragedy?

From difficulty, came opportunity. After 4 months and zero sales, he decided to come up with some sort of online portal where all people from teleconferencing could come, download reporting and keep up with what everybody else in the team was doing. Even though it was 2001, which is not too long ago, this type of remote work and environment was something incredibly new.

This was his first startup and he realised that more than selling access to an online portal, he was selling information. His next step was talking to the big players in the market, such as PWC and IBM, and asking for their opinion and their specific needs for that moment. A few months later, when he had a proper product, he was able to go back to these massive players and sell, which is an incredible endorsement to any startup.

The business took off pretty quickly after that. Looking back, Jeff realises how much of hard work he has always put into his businesses and ideas and, of course, that he went through some bad times. However, focus and adjusting your mind set to realise that tough times don’t last is the most useful tip he can give to others. The ups and downs are part of the journey and knowing where you are going, what you can improve and do better, is the most important thing and what should keep entrepreneurs going.

When Jeff moved to Australia in 2007, Redback Connect was focused on selling minutes for teleconference and web conference, allowing people to meet at a distance. After a few years, they became really good at it because they were able to make the whole process for remote meetings easier.

On the direct impact of coronavirus, Redback Connect started sending their collaborators home in the middle of February so they could experience what would be needed in order to continue performing well at home. Every week they would collect feedback and start working on the technical aspect of things, softwares and any other tools needed. By mid March, when everybody started working from home as a result of the lockdown, Redback’s employees were well equipped to keep delivering and supporting other businesses.

To finalise, Jeff believes that everything is changing so fast that maybe all of us are just making things up as we go. As an optimist, he sees a new opportunity rising everywhere and from all situations, regardless of how bad things might look.

We’d like to thank Jeff for taking his time and sharing his story with us.